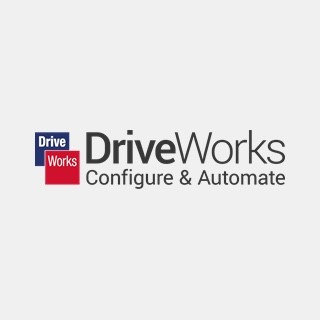 DriveWorks is a software to automate design tasks and sales configurations in the organization. With the program, processes can be substantially shortened and efficiency increased.

Sales
Salespeople can create quotation documents – fast, easy, and accurate.
Live
Or, a web module can be set up for the customers to enter their own orders.
Autopilot
Set up a server which automatically generates drawings and documents for the models.

There are three different versions of DriveWorks; Xpress, Solo, and Pro. However, it’s important to notice that the Pro version consist of four different modules and is not a single package.

2. Solo
An extension of the Xpress functionality with the option to drive materials, weldment profiles and more. Can also replace models in assemblies.

3. Pro
Yet more functionality than the Solo version. Can also generate documents e.g. Word & Excel as well as interact with ODBC, SQL, and EPDM Pro.

As mentioned, DriveWorks is a program that quickly and easy generate configurations of models created in SolidWorks. Combined with the possibility to automatically generate drawings, quotation documents, and more with a few mouse-click, gives the owner of a DriveWorks license the power to save time and money. The powerhouse of the software is that it use the data already existing in the 3D model, combine it with input data from the user, and mash it together to generate a product that is custom made in accordance to the customer’s specification. All this without the need to create all possible configurations of the model in advance – it is simply done when actually needed!

The first, and most rudimental version, is DriveWorks Xpress. It offers the absolute basics for setting up and running a project. It can manipulate dimensions, features, and even parts to achieve the result desired.
Next step is the Solo version. It’s quite a step up in both functionality as well as user experience compared to Xpress. In Solo, the user get dynamic assistance, i.e. a text box appears to help the user understand how to write a rule. Other differences are that it’s now possible to replace components in an assembly, both static and dynamic replacement. Also possible is to create documents, e.g. quotations and Bill of Materials.
Lastly, the Pro version. In difference to Xpress and Solo, the Pro version is not a single product. In fact, it consists of four separate modules to be used for different purposes depending on what functionality is desired. Some of the main areas where Pro differs from the two previous versions is that it can create ’child projects’ and also interact with PDM.
A great advantage of DriveWorks is the ability to ’step up’. A project created in e.g. Xpress can be imported into Solo or Pro and thereby not necessary to be recreated in the ’higher’ version.

The puppeteer – this is the module for creating the projects, i.e. capturing modules, building rules, creating quotation documents, etc. An advantage with the Pro version is that it’s now possible to create ’groups’. By setting up a group, one can control which users have access to which project, and (this is the big one!) using groups allows for the usage of ’child projects’. This means that one project can be set up as a master project with other sub-projects within it. For example, if you have a project where you’ve set up a table, another one where you’ve set up different chairs, you can now create a third project which can be called ’contract’ and make the two former child projects to ’contract’. Effectively making them accessible in the contract project. By doing so, the salespeople with access to the ’contract’ project can create an order containing both a table and chairs smoothly in the same quotation.
Also, the Pro version has the ability to interact with PDM, although only PDM Pro has the functionality required for DriveWorks to check in and out files.

The Autopilot module is a setup for a server to automatically generate, e.g. drawings of models. One should know that a license of SolidWorks specifically dedicated to the Autopilot software must also be installed on the server for this to work.

The last puzzle piece in the Pro Suite is the Live module. Instead of entering data directly to DriveWorks on one of the local machines by the salespeople, a Live module can be setup in a web browser for the customers to customize the product themselves. It should be noted that for the Live module to work, the Autopilot module is required. 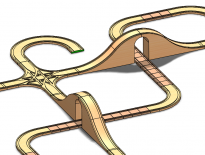 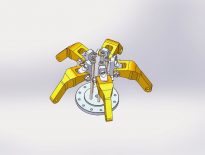